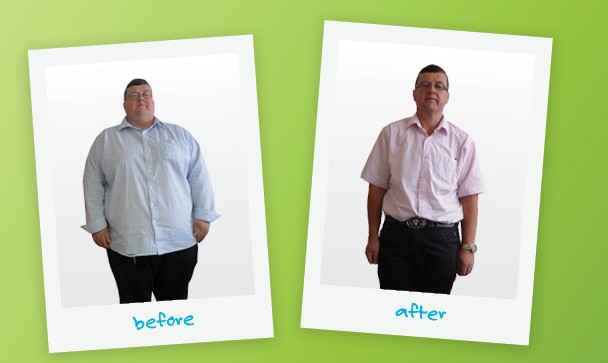 The Donabate native used to down an average of 24 cans of sugary drinks a day.

When he reached a staggering 28 stone, Declan decided it was time to turn his life around.

“I couldn’t walk 20 feet without panting and I couldn’t do my job in any comfort because of the weight,” he said.

Declan, a keen motorbike enthusiast was frustrated that he could never get to the race track.

“I watched from the sideline.

“I would have made a crater in the road if I fell off,” he joked.

“The road would be more in danger than I was.”

With a BMI of 64, Declan signed up to Motivation Weight Management in Swords to battle the bulge.

He soon realised how unhealthy his lifestyle was.

“One of the first things we had to tackle when I joined motivation was the sugar and fizzy drinks,” he said.

“I decided to go cold turkey and had major sugar withdrawal symptoms.

“I was seeing a pink elephant at the end of my bed and all sorts for a while,” he laughed.

Changing his diet resulted in Declan losing over 14 stone and enabled him to realise his motorbike racing dream and compete in a race in the Phoenix Park.

“I will never forget the feeling of sheer delight and sense of achievement as I got kitted out and took my place in the race,” he said.

“I will never go back to my old ways and I am now a completely new man.”

The coach driver now has a healthier outlook to life.

“I feel better in every way; I walk, sleep and work better since I lost the weight.

“I am much more confident and happier in myself and my energy is fantastic,” he said.

“My German Shepherd Sally refuses point blank to go for a walk with me anymore as I walk too fast for her — one of the lads brings her instead.”